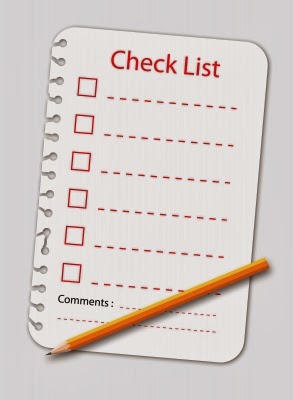 
It's amazing how much you can get done when you have a to-do list.  Every day, for the past three days, I've made a list of things needing to be done around the house.

Side note: Yes, I know I should have been writing.  But I have these things called "kids".  They tend to take priority until they go to bed.  Plus, minor OCD tendencies stifle my creativity when the dishes are piled up two feet and dirty laundry starts to creep out of the hamper.  My clarity of mind is directly related to my surroundings, which is why I love to go to a nice, clean restaurant after kids are in bed to write.

In the past, I'd look at my nearly endless list of things to do and heave a deep sigh before diving in.  Marking off the individual chores as they were completed gave me a small sense of satisfaction, but I would inevitably give up before everything was done.

This week has been different.

The first day of my list-making, I numbered each chore.  They were listed in order of importance, so I decided to divide my list into groups of five.  Next to each group, I wrote an affirmation.


My list had a lot more than twenty items.  It included things like making bread, laundry (four times - we were in desperate need of clean things to wear), fold laundry, shred papers, shred more papers, make beds, help my younger kids clean their room, etc.  Some things only took a couple of minutes, others required half an hour or more.

Once I got my kids going with schoolwork and other activities, I got to work.  I didn't want to end the day not even reaching "okay" level, so I knocked out the first five in less than an hour.  The next five took a little longer, thanks to child intervention.  The process became addicting - complete a chore, mark it done, check to see how many more I needed to reach the next level.

By the end of the day, I was amazed how much I had completed.  Chores I had procrastinated doing for months were done.  My house was clean(er).  And even though I only reached "Great!", I felt accomplished.

Day 2 of list-making began very much the same, except for a couple of differences.  Instead of prioritizing the chores, I simply listed them out and kept a tally of how many I did.  Being able to choose which chore I would do next gave me the freedom to group chores.  Taking care of the growing pile of papers in my room was combined with clean my room, sweeping the kitchen was combined with cleaning it up.

The other change I made was to add letter grades to each level.


For some reason, adding the letter grades inspired me even more.  Maybe it's the nerd in me.

As I worked, my kids noticed I was doing something not involving them and wanted to help.  I'm all about getting kids to pitch in and learn how to do things for themselves, so I let them.  It did take twice as long to get things done, but it was worth it.  Watching my two-year-old trying to manhandle the vacuum was both heartwarming and hilarious.

Despite having "help", I reached "Great!" level by the time my husband got home and the house looked amazing.  He laughed when he saw my list, darn boy, then pointed out I was only three away from "AWESOME!" and an A grade for the day.  I could have slugged him.

I was tired.  Not just *yawn* tired.  Feeling-it-to-my-bones-and-beyond tired.  But the final three nagged at me. (I think he knew they would.)  After my husband and oldest kid dashed off to scouts, I dragged myself off the couch and checked my list.  Three things popped out at me as semi-doable - the bedrooms needed to be vacuumed, one more load of laundry needed to be put in, and the towels in the dryer needed to be folded and put away.

Somehow, I found the energy to start.  My younger boys pitched in and miraculously, we finished.  Not only that, but I completed two additional chores before my husband and son came back home.

I learned a few things about this experience:


MORAL OF THE STORY (or "How I Can Apply This to My Writing"):
Make a list of things to do - write a scene, develop a character, outline a chapter, etc. - and give myself a grading system.  Challenge myself to reach "A" level each and every day, but don't beat myself up if all I reach is "C".

Now, if you'll excuse me, I've only reached "Good" level today and I'm three shy of being "Great!".  Time to get to work!

Obligatory end-of-post question: How do you motivate yourself to get things done?
Email ThisBlogThis!Share to TwitterShare to FacebookShare to Pinterest