This week has been one of those weeks.

The kind where my brain decided to go on vacation even though my to-do list was a mile long.  Tasks that normally take a mere thirty minutes took THREE DAYS.  Not even kidding.  I wish I was. 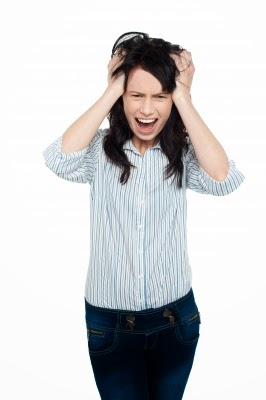 It doesn't help that a boatload of "must do" items got piled on me last minute.

Or that practically nothing got done while I was sick last week and now I'm playing catchup.

Or that my children have been intent on destroying what little I have accomplished the moment I sit down.  Yeah, they're wonderful like that.

Despite that, I'm sure I would have conquered all.  Because that's what moms do, right?

No, what got me was the constant interruptions.

While making pear bread to utilize the gigantic pears we got from Bountiful Baskets, my 4yo "needed" me - "Mom!  Look at this!"  "Mom, he's touching me!"  "Mom, I want cereal."

While trying to do dishes, my 2yo pulled every box-like item he could find to the counter so he could climb up to play with the dried out Valentine's Day flowers still in the vase.  They spilled and dishes got put on hold while the mess got cleaned up.

While trying to do laundry, both my 2yo and my 4yo argued who got to help switch the clothes from the washer to the dryer.  A screaming match ensued.

While trying to tidy up the family room and vacuum, fights broke out as to who got to pick up what.  Physical altercation.  Again.

While trying to help my oldest son with schoolwork, his brothers climbed on tables, the chairs we were sitting in, and me.

Even now, while trying to write this post, I've been interrupted by all my children plus one.

Add to all that the last-minute errands, helping my oldest with his schoolwork, and unexpected four-hour excursion to upgrade phones.

Crazy thing is, if I could have focused on one item at a time and worked on it until it was done, my entire list of to-do's would have been complete within a few hours and I could be spending time with my kids and relaxing today.

That logic is lost on my kids.


MORAL OF THE STORY (or "How this can be applied to the writing process"):

Yes, it's that simple.

Focus on one work-in-progress, on one draft, on one chapter, on one scene until it's done.  Brainstorm before you outline.  Outline before you draft.  Draft before you revise.  Revise before you submit.

There's a time and place for everything.  If you try to do it all at once, you'll end up with one giant tangled mess and it will take much longer than if you had narrowed your focus.

One last note - I do believe in having multiple projects in the works at the same time.  But focus on a single one until you've completed each step.  Outline project #1, then brainstorm project #2.  Draft project #1, then outline project #2, then brainstorm project #3.  And so on.  I don't recommend having more than 2-3 projects going at the same time.  Life is crazy enough without deliberately adding to it.