How to Make a Diet Dew Cake

I wasn't going to post until Thursday, but today is my husband's birthday and I'm awfully proud of my latest creation.

We don't do parties or anything, but I try to make each year special.  Like the time our boys and I attacked him with Nerf guns when he came home from work.  The house was decorated in streamers and thirty-four helium balloons (because that's how old he was).  While we waged war in the dark, the "Mission: Impossible" theme song played in the background.

That was a good year.

This year, I kept it low key.  I stole him away for lunch over the weekend and wandered sporting goods stores with him so he could closely examine hiking backpacks only to determine they weren't what he wanted.  While out and about, I casually inquired what he wanted for his birthday dessert.

What he didn't know is I already had it planned.

Instead of the brownies he requested, this is what he got. 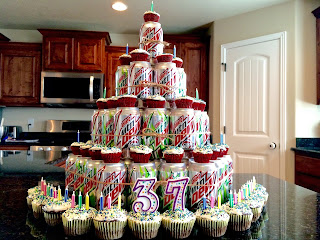 It's a Diet Mountain Dew cake.  Made from sixty-four cans of soda, cupcakes, and a bit of twine.

It's ridiculous how easy this was to make.  All you need is a box of cake mix, the ingredients to make it up, a bunch of soda, and pretty decorations.  I don't have a preference for cake mix brands, but who can pass up Triple Chocolate Fudge cake mix?  Is it even humanly possible? 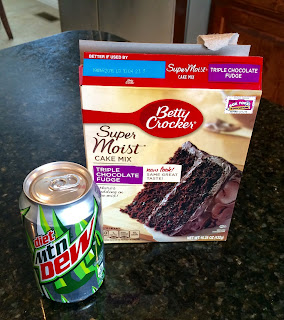 If you've ever built with blocks, you can construct the "cake".  Start with a single can of the soda of your choice. 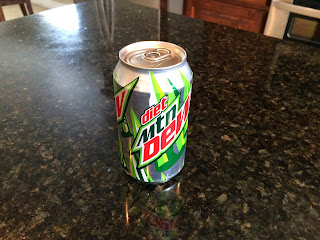 Surround it with six of its buddies. 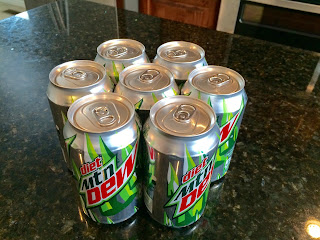 Add another can on the center can.  This is a baby "cake".  If you want it bigger, add more cans around the edge on each level.  My "cake" took 37 cans for the base level, 19 for the second level, 7 for the third level, and 1 for the top - for a total of sixty-four cans.  It took six twelve-packs or three twenty-four packs to achieve that lofty number. 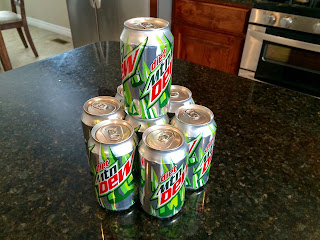 You'll want to tie each level with string, twine, ribbon, or anything else you'd like.  Not only does it look pretty, but it shores up the semi-wobbly cans and keeps them in place.

Top each exposed can with a cupcake.  A four-level soda can "cake" has thirty-seven exposed cans.  Which is fortuitous for me this year since that's exactly how old my husband is!

I opted for mini cupcakes to go on the cans since I wasn't sure how well a regular one would fit and I wanted to stick to a single cake mix.  I ended up with thirty-seven minis and seventeen, I mean, fourteen regular cupcakes.  We didn't eat three before they were even frosted...no...not us.

I'm going to warn you - since you're tying your cans together, be VERY careful with your candle placement.  Twine and ribbons are highly flammable.  You don't want to inadvertently invite the fire department to your party.

Last little tip - make sure to set it up where it's going to be displayed.  Full soda cans tend to be heavy.

Now, if you'll excuse me, I have to keep my munchkins away from the temptation long enough for the birthday boy to see it.

Hey!  Keep your fingers out of the frosting!

Wish me luck.  I'm going to need it.
Email ThisBlogThis!Share to TwitterShare to FacebookShare to Pinterest
Labels: Food & Drink, How-to