The Ramblings of the Exhausted 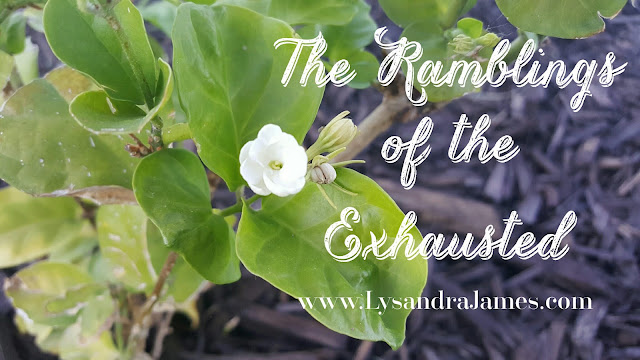 It's been four days since I've gotten a decent night's sleep due to difficulties with my back and it shows. I am not fit for public in any way, shape, or form.

Despite this frustrating setback, I do have a few updates to report.

The rewrite on Between Shadow and Light is coming along nicely. Slowly, but it's coming. I have a friend who's keeping me accountable and has helped me set a deadline in mid-September for completion. I've given him permission to nag and scold me if I don't meet it.

I'm loving what the story is evolving into. Better description, more detailed worldbuilding, and improved character development. This is easily the best version yet and I'm excited to share it when it's done. My hope is to start submitting it this October.

Along with my current WIP, I've been keeping busy mentoring another writer as she whips her short story into shape. I was apprehensive at first, not knowing how she would take my suggestions, but it's been such an enjoyable process. I've loved helping her and seeing her story evolve as well.

As for my other two blogs - "Capsule Cooking" and "Believe is a Verb" - they've been put on hold until my back problems have been resolved. I hope to get back into the groove within the next few months. Until then, I'm going to keep my focus only on what I can handle - my WIP, this blog, and mentoring.

The thing that has intrigued me and frustrated me the most these past few months is how back and neck problems can change and evolve (that is obviously my favorite word today).

When I first started having serious issues again, it began with my neck and arm. My back was still feeling great. As treatment progressed to restore my cervical curve, my back protested. Hard. Pain shot down my right leg and I struggled to function. As we tried to address this new development, treatment only aggravated the problem. It continued to worsen until that fateful day on the first of June where a simple sneeze sent me to the emergency room.

From that day, the pain shifted from the right side to the left.

This, more than anything, frustrates and baffles me. For years, my right side was the one that nagged me when I overdid it. Now it's nearly pain free while my left side screams. Where before, I had to sleep on my left side because sleeping on my right hurt too much, it's now quite the opposite.

Do you know how hard it is to suddenly shift your sleeping habits like that?

Another crazy thing is how the pain itself changes almost daily. Take this week for example.

The day started out fine. I was feeling pretty good. Pain was being managed extremely well and I was completely off all medications. Physical therapy went so well, they added a new exercise for me to do. I was mostly functional and moving fairly easily.

Then I twisted wrong. I didn't really feel much at first. I knew something had happened and it probably wasn't good, but it didn't really register until later in the evening when my ankle felt like it was sprained. It so wasn't. I kept expecting to look down and see it swollen to the size of a softball. Nope. Perfectly normal.

That was the first night of not sleeping well. It wasn't so much from pain as much as discomfort. I had been sleeping with a bolster under my back and it had been helping. Monday night, it didn't help at all.

My leg felt like it was asleep the entire day. Yes, my whole leg. I couldn't get it to "wake up". My toes were tingly and numb, my leg felt heavy and dead. It drove me to distraction. The only time it seemed to get better was when I was up and moving around. I did manage to get in over 3100 words on my rewrite, though. (Woohoo!)

Bedtime sucked. Bad. No matter which position I lay in, my leg hurt. The "I just hit my funny bone" kind of hurt, but it never faded or went away. I took some ibuprofen, which eventually helped me get to sleep, but I woke up at 2 am in pain again. More ibuprofen. More sleep. Up early.

Half of my foot and toes felt numb. Kind of like when your feet get really cold and you can feel your pinky toe in your shoe and it drives you nuts until you take off your shoe and warm up that darn toe.

Except I couldn't get the feeling to stop.

Due to the lackluster sleep the night before, Diet Pepsi was my friend.

Bedtime was a repeat of the night before. Except this time, I woke up at 1:30 and no matter what I did, I couldn't get it to stop hurting. Many tears ensued. (Lack of sleep is NOT a good thing for me.) More ibuprofen. I eventually went back to sleep.

Still numb. Can't do the stretches my physical therapist gave me because they hurt too much, so he gave me new ones to do in our neighborhood pool. He's also changed up my treatment to accomodate the new symptoms.

I'm overly emotional from lack of sleep, even after taking a nap this morning while my children wreaked havoc on my house.

The house survived. Still determining whether I did or not. Jury is still out on the matter.

Pain is only evident when I'm lying down. Numbness is semi-constant.

While it's extremely frustrating, the progression of symptoms is intriguing. It's also interesting what aggravates it. A sneeze, a cough, a twist of the back. Seemingly minor things, yet they cause the most problems. I think that could be a metaphor for life, but my poor muddled brain can't quite make it work.

And now, I'm fighting to keep my eyes open long enough to finish this post. I think I'll be lucky to get the photo up. Another nap is definitely happening today. And maybe an early bedtime. Assuming I can get comfortable enough to fall asleep and stay asleep.

I'll shut up now. I recognize the stages of fatigue I go through and the rambling one is often followed by a sentimentally delusional and emotional one where I turn into a big ol' mess of snot and tears. Let's avoid that one. It's not pretty.

So until next time...go take a nap for me. And enjoy it thoroughly.

So very good...
Email ThisBlogThis!Share to TwitterShare to FacebookShare to Pinterest