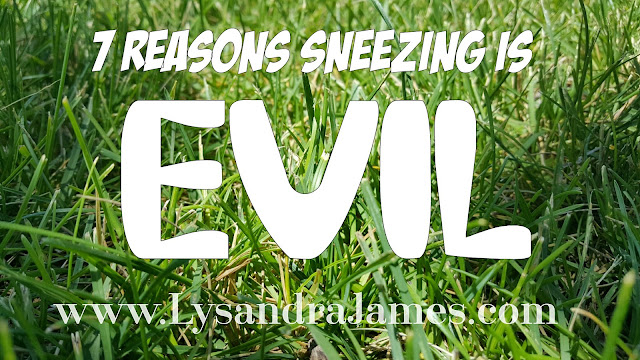 I'm not the only who believes this. Throughout history, sneezing has been associated with the devil and other evil things. I have proof I stole from off the internet. And you know it's valid because everything on the internet is 100% true.


"Some people believed that a sneeze causes the soul to escape the body through the nose. Saying "bless you" would stop the devil from claiming the person's freed soul. Others believed the opposite: that evil spirits use the sneeze as an opportunity to enter a person's body. There was also the misconception that the heart momentarily stops during a sneeze (it doesn't), and that saying "bless you" was a way of welcoming the person back to life."  - http://people.howstuffworks.com/sneezing.htm

If that's not enough to convince you, I've compiled a list of valid reasons to prove my point.

1. The Common Cold or the Flu

Oh, yes. Those times of snot-filled days where all you want to do is curl up in a steaming hot shower and drug yourself up just so you don't feel quite so miserable. One sneeze and all that mucus that's been backing up in your nostrils dislodges. Heaven forbid you don't have a tissue handy!

You're enjoying the outdoors on a fine spring day when BAM! Your nose decides to be offended by some harmless pollen just minding its own business. Sneeze once, twice, ten times and you're done for. Suddenly that family picnic is torture and don't even think about rolling down the windows to relish the feeling of the wind in your hair.

I honestly had never heard of these until I married my husband, but he suffers from them all the time. So do two of my kids. Apparently, just by walking out into the sun can cause them to sneeze. Really.

My kid is clumsy enough as it is (falling UP the stairs on a regular basis). Don't add sneezing while walking! I swear he's not going to make it to adulthood.

Thanks a lot, sneezes.

What are you thinking, sneezes? Are you trying to kill me?! The last thing I need is to be driving through rush hour traffic and have a sneezing fit. When sneezes attack at that most vulnerable moment, all I can picture is a ten-car pileup on the news and a headline on Facebook that reads, "Sneezing Attack Sends 12 People to the Hospital".

Yeah, I don't need that kind of publicity, thank you very much.

You know what I'm talking about. One stupid sneeze and suddenly no one wants to be within thirty feet of you because they don't know whether you're contagious or dealing with allergies or what. Even if you clarify that you're not sick, they still watch you warily because we all lie about it.

Oh, yes. I just called you all out on it. Don't deny the truth.

The other day, a friend of mine sneezed while at work. Seemingly harmless, right?

That sneeze gave him a bloody nose. And in case you're thinking, "It was just a one-time occurrence. Coincidence, really," I'm here to set you straight.

This same thing has happened to my boys. Multiple times.

Here's what happens - the serious lack of humidity in the air dries out the blood vessels in their noses which causes them to become less malleable and flexible. One good sneeze and they crack open, spilling blood and causing my children to look as if they've been part of a seriously epic battle. (Not kidding. Blood EVERYWHERE.)

Just over a month ago, I was getting ready for the day. My back was acting up again, but that morning wasn't too bad. Some pain shooting down my RIGHT leg and it was somewhat hard to function, but I was handling it just fine.

It was a stupid little sneeze, but it shoved that disc further out to press against the dural sac surrounding my spinal cord (according to the MRI). I collapsed in agony. My husband took me to the ER where they did tests to make sure I didn't need emergency surgery and drugged me up until I could barely feel a thing.

When I finally came out of that med-induced mental numbness, I discovered that sneeze completely changed the protruding disc's location. The pain no longer shot down my right side. It was now on the LEFT.

I did everything I could to avoid sneezing again. I was successful for over a month. Then the sneezes started sneaking in before I could stop them. Fortunately, they only set me back recovery-wise once. But they still try. Oh, do they still try. But I'm on to them. I know their devious plan.

Yes. It is. The evidence is there. You can't refute it. (Okay, you can. But I refuse to listen.)