Magic of the Purest Kind

I am a writer of fantastical worlds filled with magic and mystery, creatures never before seen, and a bit of sass thrown in for fun.

But I am, indeed, a realistic skeptic.

That's probably why I love to escape into the written word so much. It's also probably why I lean more toward the speculative side of things. The "What-if's" and the "Could-be's."

Well...and clean Regency romances. But we won't go there.

I'm the sort who, when watching a magic show or an illusionist perform, can speculate how a trick is done and be fairly accurate in my assessment. That knowledge doesn't alter my enjoyment of the show, but I simply can't fully believe.

That said, I do believe in a sort of magic.

This is my grandma. 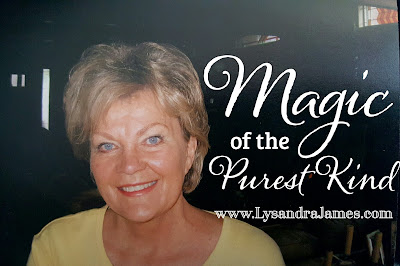 From a young age, I have believed her to be one of the most beautiful and amazing people I've ever known. She does have her faults, as everyone does, but there is something extraordinary about her. Special.

She's hobnobbed with celebrities, traveled around the world, and even dated a NASCAR driver at one point. She's been a lounge singer, a millionaire's wife, a spokesperson for a pharmaceutical company, and a real estate agent who could sell a house or two whenever she needed some spending cash (I witnessed this last one personally multiple times and I still don't know how she did it.).

Her laughter is contagious, her smile radiant. She exudes class and elegance without trying. And fantastic things just seem to happen whenever she's around.

If you can't tell, I adore her. I aspire to possess her same magic someday.

I have dozens of memories of her particular magic in action, but the one that stands out the most happened a few years ago.

Handyman Husband and I were living in St. Augustine, Florida at the time. We loved being an easy 20-30 minute drive from the beach and spent many weekends there enjoying the sand and water.

One day, my grandma called to tell me she was going to be in town. She couldn't stay more than a few hours due to a tight schedule, but she wanted to spend the day with us. She and I enjoyed lunch at a restaurant overlooking the St. Johns River in Jacksonville. The day was perfect. A slight breeze that cooled the October heat. Quiet conversation. Good food.

And I had her all to myself. (That doesn't happen very often. Her company is in high demand wherever she goes.)

We met up with Handyman Husband and our oldest son, who at the time was our only child. Dinner was at the Santa Maria - a restaurant on the pier with trap doors to allow patrons to feed day-old bread to the fish below.

My little family had been to Vilano Beach several times before. It was a favorite of ours because of the showers and splash pad next to the parking lot. We always took the time to run through the water before we headed home to dislodge excess sand and seashell fragments. It was also a fantastic place to find seashells since part of the beach itself was made up of tiny bits of shells. A day at the beach was never a bad day.

That evening was different, though. Standing on the sand with my grandma, the air felt alive. More real than ever before. I initially believed it due to my grandma's presence. She has that effect on people.

Then we saw the dolphins.

Dozens of them. Splashing and playing in the waves. They were so close, it felt we could reach out and touch them. In and out of the foam-crested waves they danced. Their enthusiasm and joy tangible and infectious.

Their presence drew other beach-goers to where we stood. Some had come to that very beach their entire lives and never seen dolphins so close to shore. They gawked and snapped pictures, wondering out loud why the playful mammals had chosen that shoreline.

As we watched the frolicking sea creatures play, a shout went out. "The shuttle is launching soon!"

A night launch. That very day. And we hadn't heard a thing about it. While we had gone to the beach to watch a shuttle launch during the day, a night launch was a rare treat.

We discarded our original plans of leaving as night fell and we stayed to watch the shuttle's trail of light and smoke as it launched upward into the sky. With the deepening darkness, the fire from the propulsion tanks lit up the shuttle's path. Shouts of joy and whistles of excitement resounded as the people on the beach watched its ascent.

Call it what you want - serendipity, happenstance, pure luck. To me, that day was filled with magic of the purest kind and memories I will treasure forever.

So, yes. I do believe in magic.

And I have the privilege of calling her "Grandma."
Email ThisBlogThis!Share to TwitterShare to FacebookShare to Pinterest
Labels: Dream Chasing, happiness, magic