Why I Don't "Network" 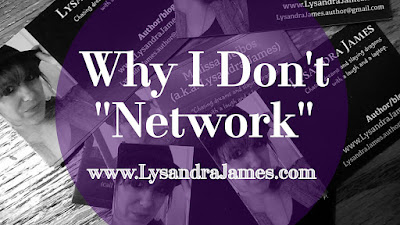 The first time someone told me I was good at networking, I gave them a blank stare. Then protested quite loudly.

Meaning, it's all about the bottom line.

That's not how I work.

I'm the sort of person who frequents an establishment because of the people, not necessarily because of the services rendered. Take, for example, my favorite soda shoppe. On the surface, it's just like any other soda shoppe out there. They serve flavored sodas and treats. If I wanted a diet Dr. Pepper with brown sugar cinnamon, coconut, and cream (aka Doc Horchata - my own creation), I could go just about anywhere and get it.

BUT I can't go just about anywhere and chat about books and movies with the store manager (who helped me create the Doc Horchata in the first place) or joke around with the employees who know exactly what kinds of sodas I like and give me recommendations for new ones.

The same thing applies with my friends in the writing and art worlds. I'm not in it for the money. Not really.

Heck, I'm not even in it to become famous.

I'm in this to connect with people who understand me. Who I can talk with for hours on end about the things I'm passionate about. Who "get" me.

I'm in this to be the truest me I know how to be. I'm in it to make a difference in other people's lives.

And if I end up making a bit of money as a result, so be it.

Because to me, people matter far more than the bottom line.
Email ThisBlogThis!Share to TwitterShare to FacebookShare to Pinterest