Someone to Watch Over Me 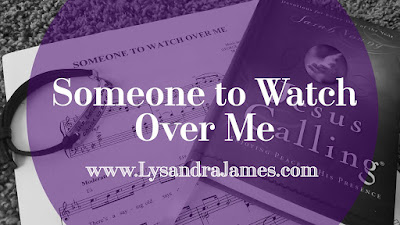 I have a guardian angel.

She's quite determined to interfere in my life. In all the very best ways, of course. And not just my life. She's inserted herself into my oldest son's life as well.

About month ago, a dear, sweet friend of mine passed away. She was an absolute doll in life and wanted nothing more from me than to see me succeed. I adored her and she adored me in return. However, her poor health prevented her from doing much to help me. It didn't stop her completely, though.

For my birthday last year, she gave me a bracelet that reads "she believed she could so she did." Oh, yes. I did cry. Her loving support meant the world to me and the bracelet, which I've worn so much the edges have lost their silver plating, is among one of my prized possessions.

My friend also wanted to buy me a book, Jesus Calling by Sarah Young. It's a daily devotional worded as if Jesus is speaking personally to you. While I appreciated her sentiment, I wasn't in a spiritual position at that time to accept it, and I told her so. She graciously respected my wishes, but she never gave up on me.

The day of my lovely friend's funeral, nearly every speaker mentioned her love for Jesus Calling and by the time the service was over, I had determined to purchase it for myself. My friend had wanted me to have it, so I was going to make it happen.

The first hint that someone was now watching over me happened when I went to order the book. I had an Amazon credit that covered the entire cost of the book plus some. I smiled and waved it off as a serendipitous event. It happens on occasion due to returns or Amazon Kindle book refunds. Nice, but no biggie.

The next hint wasn't a hint at all. It was an outright declaration of my guardian angel's presence. Bold and in my face. My friend never was one to go the subtle route.

My book arrived right on time, two days after I ordered it (gotta love Amazon Prime!).

Instead of just one copy of the book, I received two. In two separate packages.

The first thing I did was to check my Amazon account to make sure I hadn't accidentally ordered it twice. I had been somewhat emotional when I placed the order and it was a very real possibility. But no, I hadn't. A single book had been ordered.

Then I contacted Amazon customer service. They've always treated me well and I was sure they could clear up what happened. The gentleman helping me checked their records. He confirmed that my account had been charged for just one book and that two had been shipped. He then told me that I could keep the book, give it away, or throw it away and that Amazon would take responsibility for the mix-up. (I told you they treat me well. I love Amazon.)

As soon as I hung up, I knew exactly what had happened.

She had interfered from beyond the grave to ensure that not only I had the book she wanted me to have, but that I had one to give away to someone else.

A few days later, I posted a photo on Facebook. I can't remember exactly what it was, but when I checked on it a couple of hours later, my friend had liked the post. Her "like" was dated before she had passed. I later determined that she had "liked" the album it went into and that was what the time stamp indicated. But she hadn't been the only one to do so and Facebook chose to display HER name rather than anyone else.

Maybe that last one is a bit of a stretch. But when added to the rest, it does make one think...

This week, I've felt her hand in my life again. I was in a low spot, feeling somewhat overwhelmed, stalled, and needing...something. So I prayed. I asked for something I hadn't vocalized to anyone. Not even to myself until that moment. And that was it.

Or so I thought.

Two days later, an opportunity landed in my inbox. An opportunity that truly was an answer to my heartfelt plea. The plea that only God and myself knew.

And, obviously, my guardian angel.

So super devious and sneaky...

While I'm still waiting to see if this opportunity pans out, I think it's exactly what I needed. Exactly what I asked for. Even the possibility thrills me and motivates me to keep moving forward.

I shared all of this with my 16yo son a few days ago. He was astounded. Not just what has happened to me, but for things that started happening in his own life about the same time they started for me. Answers to his own prayers. We talked things over and laughed as we realized my guardian angel had extended her care to him as well. We also realized the extra copy of the book was meant for him. The messages it contains were exactly what he needed, too.

Excuse me while I wipe away a few tears...

There will be those of you who will claim that all of this is one big coincidence. That I'm reading into this what I want. That guardian angels don't exist.

Believe what you want. Because I know guardian angels are real. I know they're here to help us and guide us as we strive to be the best we can.

And I, for one, am extremely glad for mine.

Because heaven knows I could use someone to watch over me.
Email ThisBlogThis!Share to TwitterShare to FacebookShare to Pinterest